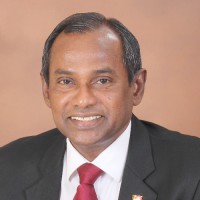 He is the Chairman and Managing Director of B. Darsin De Silva & Sons (Private) Limited, Ceylon Cinnamon Growers (Private) Limited and Cinnamon Training Academy Limited. He is a director of the Sri Lanka International Arbitration Centre ( Guarantee) Limited and HVA Foods PLC. He was the Chairman and Managing Director of Intercom Group of Companies until his retirement in 2014.

Mr. De Silva as Founder Chairman of the Ceylon Cinnamon Association was instrumental in highlighting the importance of the Cinnamon Industry over the last three decades.

He was a Director of the Co-operative Wholesale Establishment (CWE) from 1994 to 2000 and Acting Chairman in 1998; and Chairman of the Committee appointed by the Minister of Trade and Commerce in drafting procurement procedure for the CWE. Consultant to World Trade Organisation - International Trade Centre, Geneva for EU assisted MARKUP project for East African Community countries.